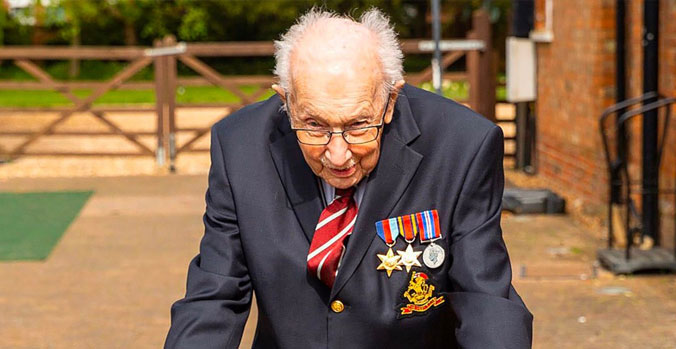 The news that British war veteran Tom Moore (100) has contracted the coronavirus is stirring up a lot in his native country.

It made the front pages of almost all newspapers and Prime Minister Boris Johnson also made himself heard. “You have inspired the country, and I know we all wish you a full recovery,” he wrote on Twitter.

Moore gained national hero status last year through his campaign to raise money for the fight against the coronavirus. He raised nearly 40 million pounds (45 million euros) by walking in his garden. He later scored a hit by singing the song ‘You’ll Never Walk Alone’ and was knighted by the Queen.

The daughter of ‘Captain Tom’ announced last weekend that her father is now in hospital himself. He contracted pneumonia and later tested positive for the virus.

The veteran would not be in intensive care. British authorities are currently vaccinating older people, but Moore’s turn has reportedly not yet gotten to.

That the famous Moore is now in hospital dominated the news on Monday. “Pray for Tom,” headlined The Sun newspaper. The Daily Mail had a similar headline, “Pray for Captain Tom.” The Guardian, the Daily Express and The Daily Telegraph also pay attention to the sick veteran on their front pages. “Captain Tom is fighting corona,” Metro writes.

Tourism in Spain At Its Lowest Level in Half A Century